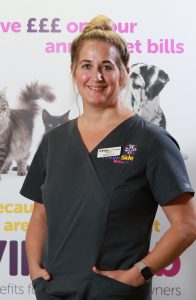 Kelly was born and grew up in Bristol but settled in Swadlincote when she set up Bright Side Vets with her husband in 2014.  With a passion for all creatures great and small, Kelly knew from an early age that she wanted to be a vet.  An aspiration she achieved when graduating from Bristol University in 2001.

Launching her career during one of the worst epidemics, for farms the UK had seen, meant the first six months of being a vet saw her seconded by DEFRA to help with the national effort to combat Food and Mouth.  It was not the best start but overseeing a squad of soldiers certainly helped to hone her leadership skills.

Kelly moved to South West Wales where she learnt her craft by working in a mixed practice.  A time that was thoroughly enjoyable despite having to work all hours and with all sorts of animals in rural Pembrokeshire.

After deciding that small animals were her skills were most suited, Kelly moved to the Midlands to join a growing practice.  She quickly established herself and ultimately became clinical director, responsible for 8 other vets over 3 sites.  During this time Kelly was able to pursue her interests in surgery and gained a certificate.

The Royal College of Veterinary Surgeons (RCVS) recognised Kelly as an Advanced Practitioner in Small Animal Surgery in 2015.  At the time she was one of only around 100 first opinion vets in the country to gain this accolade.  She now also works with the RCVS to assess applications of vets wishing to be gain this accolade.

In 2014 Kelly and her husband Jason, took the decision to set up Bright Side Vets.  As a small animal first opinion practice, they wanted to establish somewhere that was family run and well known for its client care and clinical standards.  Not being one to rest on her laurels, Kelly has been working on developing a referrals service that allows her to extend the reach of Bright Side and offer the technical surgeries that she loves to carry out.

In her spare time, Kelly loves being active and can often be seen running around the National Forest.  She loves yoga, travelling and when time allows spending time with family and friends.