So, it’s that time again where we need to announce a star pet.  It’s been a very busy couple of months with lots of interesting, medical and surgical cases, however, a proper little character has stood out for his amazing personality and true grit.  Henry lived the life of a feral/ stray tom cat (so he can be feisty) but he is a fantastic cat that really landed on his paws when he was adopted by his owners Mr and Mrs Lester.

Poor Henry was the victim of a road traffic accident (RTA) receiving serious injuries to most of his body – he quite literally looked like he had been run over by a bus.  He was bruised with severe facial injuries including a fractured cheek, concussion, damaged teeth and a fractured jaw.  He also had punctured his lungs leading to a life-threatening condition called pneumothorax where the space surrounding the lungs fills with air so the lungs cannot expand resulting in impaired breathing. Henry had also suffered from fluid and blood accumulating into the lungs.

RTA’s can be a common occurrence!

Sadly we see many RTA’s due to cats having a large roaming territory, this is worsened if cats are not neutered as they roam further; crossing roads to find females when they are in season.  Typically female cats come into season in Spring.

The road to recovery

Henry received intensive care; staying with us for the week.  His care included undergoing blood tests and radiographs to establish the extent of his injuries, receiving intravenous fluid therapy and oxygen therapy.  As we discovered a fractured cheek and damaged jaw, for a short time we had to feed him through a tube inserted in his nose – called naso-gastric feeding.  As soon as he was stable enough for an operation we repaired his jaw with an orthopaedic wire and a dental was performed to remove the damaged teeth.  Henry’s chest cavity was drained regularly to remove air and fluid restricting the lungs via a technique called thoracocentesis.  Most importantly he was supported by our fantastic nursing team that checked and cared for him constantly whilst he was with us.  This included regular assessment of his pain to ensure we made him as comfortable as possible.  As a practice, we believe one of the most important parts of our job is to offer a comprehensive and robust plan to manage pain for each patient with us, making them as comfortable as possible during their stay.

Whilst he was with us Henry went from being very distressed, protective and angry with life to being a happy little chappie, even starting to knead his bed and receive fuss and strokes although as feisty as he can be cuddles might have been pushing our luck!  He had daily visits from mum and dad then finally he went home with his wire in place to continue his medications at home.  Henry is now fully back to normal he has come for his wire to be removed and the fractures have all healed. 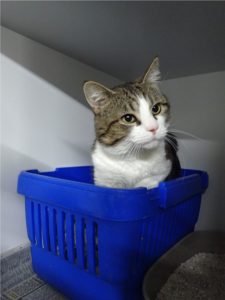 Henry back to full health

Henry apparently still likes to keep everybody in check with the occasional swipe but really is a great character.  A big thank you to Mr and Mrs Lester for giving such care and attention to a former feral stray cat who has in return given back a lot of joy to them!   Henry wins a toy for being STAR PET although we know that it may not last long now that he is back to full health!