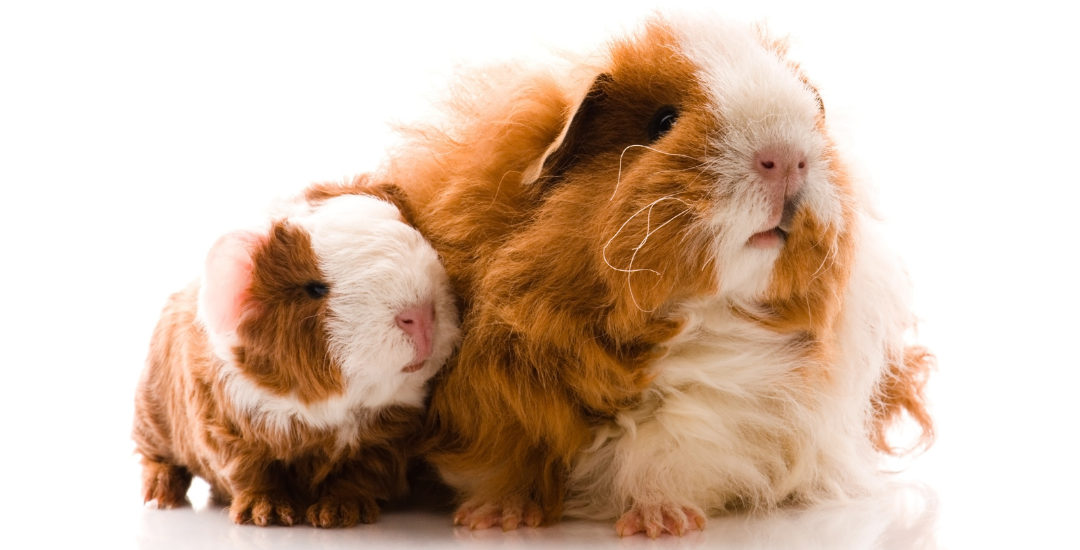 Here at Bright Side Vets we see small furies daily in practice, from Guinea Pigs, Rabbits, Hamsters to Ferrets and Chinchillas.

We are currently celebrating Guinea Pig Awareness Week across all our social media (Facebook and Instagram) and in practice and sharing lots of personal Guinea Pig stories from near and far.

Lexi is a rescue Guinea Pig who, along with her sister, arrived heavily pregnant at a very young age. As is often the story for the majority of rescues female guinea pigs who have been incorrectly housed with other guinea pigs in the past. 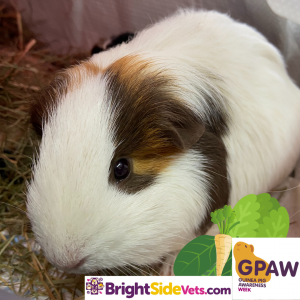 Lexi’s rescuer was monitoring her very closely as she started to show signs of labour as Lexi appeared to be fit to pop with a very large tummy. At first all was going to plan and Lexi was doing a great job and produced two healthy happy babies within a very short space of time.

Guinea pigs will give birth very quickly, normally from start to finish the process is under and hour. As Guinea Pigs are prey animals, giving birth puts them in a very venerable positions they are unable to move around quickly away from predators.

It’s only when Lexi started to struggle and seemed to be pushing with no baby being produced that her rescue mum knew she needed help. Before any pup is born, the mother will pass the placenta for the baby. This is a good indication that a pup is due imminently. Lexi has passed a placenta but no pup, and although she was trying very hard nothing was moving.

Lexi was brought to us very urgently (with her two new babies) and our vets Jess Starr and Kelly Freezer jumped into action. 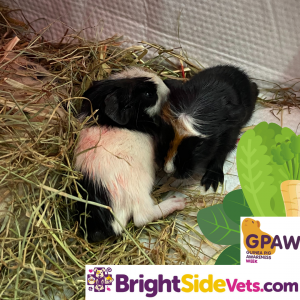 On first inspection it appeared that Lexi still had one or more babies inside as she was still pushing and pushing. The baby was not in the correct position and needed to be moved to be able to be pushed out by Lexi. Our vets helped reposition the baby to a point that Lexi could now do the rest on her own (with very close monitoring).

Unfortunately, the next two babies had already passed away, weather this was due to the birth complications or they had already passed before hand is unknown. With any Guinea Pig breeding, especially unplanned ones, stillborn babies are often expected.

Guinea pigs are fertile from 2 months of age!

Much like any rodent, Guinea pig groups can get wildly out of control very fast. Many of the litters are accidental and normally due to the miss-sexing of pairs bought from shops and breeders. Guinea Pigs are only pregnant for an average of 59 – 72 days. 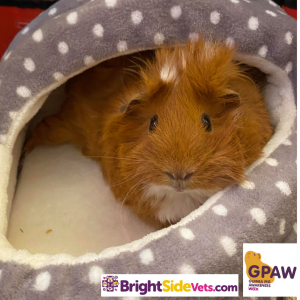 Female Guinea Pigs are also capable of producing up to 5 litters a year!

A normal litter size is most commonly between 2-4 babies. It is essential that when purchasing a new Guinea Pig that their sexes are double checked before allowing a pair stay together.

Guinea Pig babies, called Pups, are already fully furred, have their eyes open, can walk and run, and are nursing from their mother from the moment they are born. Within two days they are able to eat and digest some solid food along side their mums milk. Pups normally weigh only 100g each! They are then fully weaned onto solid food at around 3 weeks of age.

At this point it is vital to know the sexes of the babies to ensure all males can be removed at this age. Males can be paired together and often littermates make great bonded lifelong pairs!

With Lexi and her sisters story being all to common for recued Guinea Pigs it is so important to consider adopting a Guinea Pig or two when looking for new fur babies. There are lots of rescues out there who have Guineas ready for adoption all year round!

Large rescue operations can often result in upwards of 100 Guinea Pigs taken to safety, sometimes the majority of those females are pregnant or on pregnancy watch. After all the females have given birth the amount of Guinea Pigs needing a forever home could have more than doubled once their pups are counted.

It is vital to reach out and support these rescues as there are lots of loving and healthy Guinea Pigs just waiting for their forever home!

You can follow these links to see the most current Guinea Pigs needing homes from rescue centres such as the RSCPA, Blue Cross, Wood Green, and Avalon Guinea Pig Rescue.