A golden night for Bright Side

Who would have thought that almost four years after we started our little business that we would be recognised by not one, but two organisations. Kelly and I are so proud of the Bright Side Crew and have been truly humbled by what we have achieved. I thought I could share with you a little about our glittering night.

We entered the Midlands Family Business Awards over the summer and at the time did not think we had much of a chance of winning. After all, it was the biggest competition we had entered with businesses from right across the Midlands eligible to participate. What motivated us, however, was the ethos of the awards. It’s about celebrating family businesses and family is one of our key values. We are passionately independent and at a time when many vets are being taken over by big corporate companies it’s even more important. (Did you know Bright Side is the ONLY independent vets in Swadlincote?).

Our journey from entry to awards night was traumatic! Once we had been shortlisted (and amazed that we were) Kelly and I had the nerve racking experience of presenting Bright Side Vets to two separate judging panels. We now know we impressed them but at the time, being interviewed by some of the Midlands most well known business owners/directors was scary. 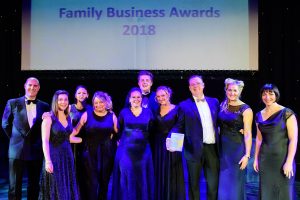 Arriving at the awards ceremony in Leicester Athena theatre, there was an air of excitement but the nerves were certainly present. Choosing who attended was a difficult task as all of the Bright Side Crew deserved to be there. Having 8 invitations meant drawing names out of a hat. The unlucky ones were left doing the honourable and much needed job of looking after the pets in our care. We are grateful that they did too.

The black tie dinner was a glamourous affair. Our crew did us proud and looked stunning, with Student Veterinary Nurse Joe wearing his first ever dinner suit! After weeks of outfit talk amongst the ladies, they all looked amazing in their dresses.

And the awards go to…

After dinner the nerves were palpable. Forty seven businesses, sponsors and award organisers made up the 350 guests. The majority were anxious to either share the news or learn their fate. 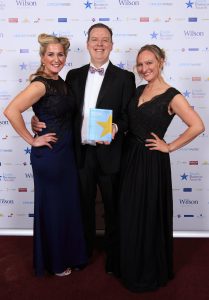 Our first award came from the Service Excellence category, where we were up against some amazing businesses such as the Fairlawns Hotel and ArrangeMY, all very different to Bright Side Vets. How the judges decided I have no idea. The overall winners were worthy adversaries with Premier Care from Mansfield taking the crown.

Next up was the much coveted Small Family Business of the Year. This is apparently the most hotly contested award with the most entries for this category. Businesses such as Dalycom, a fantastic telecoms company locally and a Tractor company from Lincolnshire were up against us. It is incomprehensible how we could compete with such organisations.
To be honest, when we didn’t get mentioned in the Highly Commended catergory, I was a little crest fallen thinking we were unlikely to achieve the highest accolade.

When they announced Bright Side Vets as the winners I could not even hear what the judges said about us. The screams from everyone were deafening! There were hugs and congratulations given before we had to go up to be presented with the award by our sponsor. I don’t think we have ever felt as proud as we did in that moment. Our business has been recognised in such a prestigious way and it was a glorious night.

It wasn’t over yet…

The night was, however, only to get better. One of the many fantastic clients we have at Bright Side had approached us and asked if we were happy to be nominated for a South Derbyshire Community Award.  We were grateful for the thought and at the time (about a month ago) we felt it was not something we were likely to be win or even be appropriate for. To be honest I probably dismissed it as I had doubts that we would be considered alongside others who do so much for our community. The nurses, fireman, police, volunteers are all amazing and in a different league. The perspective of the judges was, I have to say, one that I did not consider. 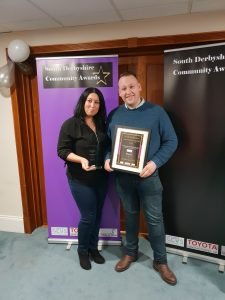 Bright Side Vets supports the community by helping the animals who are beloved family members but also the charities locally. We have always supported the likes of Wonky Pets and Harley’s Hounds to mention just a few. We do it because they are amazing people who take in the unwanted and abandoned. They are the real heroes to us and we help them because we want to, not to win awards.

Irrespective of my thoughts, we sent two of our crew off to the ceremony at the Burton Golf Club. Student Nurse Dan and Receptionist Jemma represented us and had a great time meeting some incredible people from the local community. This time we were nominated for the Community Minded Business Award alongside Melbourne Life Magazine and St Giles Hospice Shop. The night was made even better by the fact that we won again!

Overall, the whole night was truly a blessing and humbled is not the word to describe it.