There was no blocking Fudge to make Star Pet in February

For February we chose Fudge the cat as our ‘Star Pet‘!  He is a loveable and fantastic character who has struggled through a life-threatening condition and touched all our hearts – especially myself.  As one of the newest members of the team it was a case that I dealt with from start to finish and his spirit through this inspiring.

Fudge was brought in to see us because his owners noticed him struggling to urinate – he had been making frequent trips to his litter tray and straining but without any success! Cats can often have problems passing urine for several reasons, sometimes it is just due to inflammation of the bladder (cystitis) but ‘blocked’ cats (as in Fudge’s case) are a potentially life-threatening and require immediate treatment.  It was crucial that Fudge’s owners spotted the signs and brought him in to us as soon as they could.

We admitted Fudge and ran a blood test, which showed that one of his electrolytes (which would normally be passed out in the urine) had built up to a dangerously high level.  This needed several injections and close monitoring to correct.  We also passed a urinary catheter to drain the bladder and relieve the pressure that had built up and at the same time, we put Fudge on intra-venous fluid therapy to flush through any toxins.  Alongside some pain relief Fudge also had some medication to help relax the muscles that were straining, which all in all made him feel much more comfortable.

Despite Fudge’s owners quick action, he was very unwell and took a while to respond to the treatment. After a number of days hospitalised in the practice with us the perseverance from Fudges owners, who thought they might have lost him at one stage, was rewarded and by day four he turned the corner and was well enough to go home.  Ten days later and he was well on his way to a full recovery and he was back to his normal happy self. 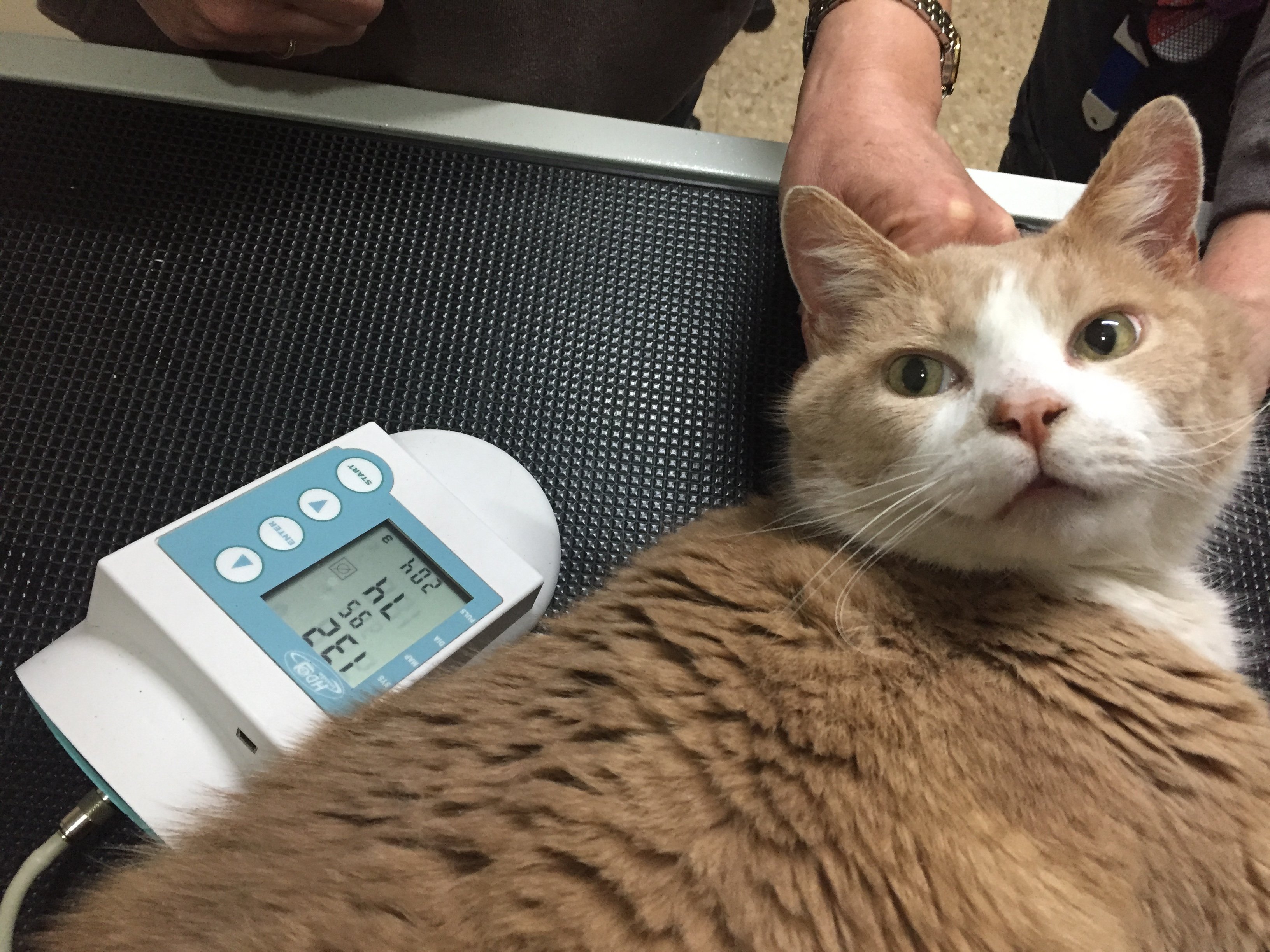 Having his blood pressure taken

Fudge has been put on a prescription diet (which he is apparently finding very tasty) that he will have to stay on for the rest of his life to try and prevent his urinary problems from recurring.  We also recommended that he lose some weight, because overweight inactive cats are more at risk of urinary problems, and his owners tell us they have bought a cat-lead and Fudge is enjoying going for walks around the garden! It is great that Fudge is doing so well, and we hope that his new exercise regime and diet keep him problem free for many more years to come.